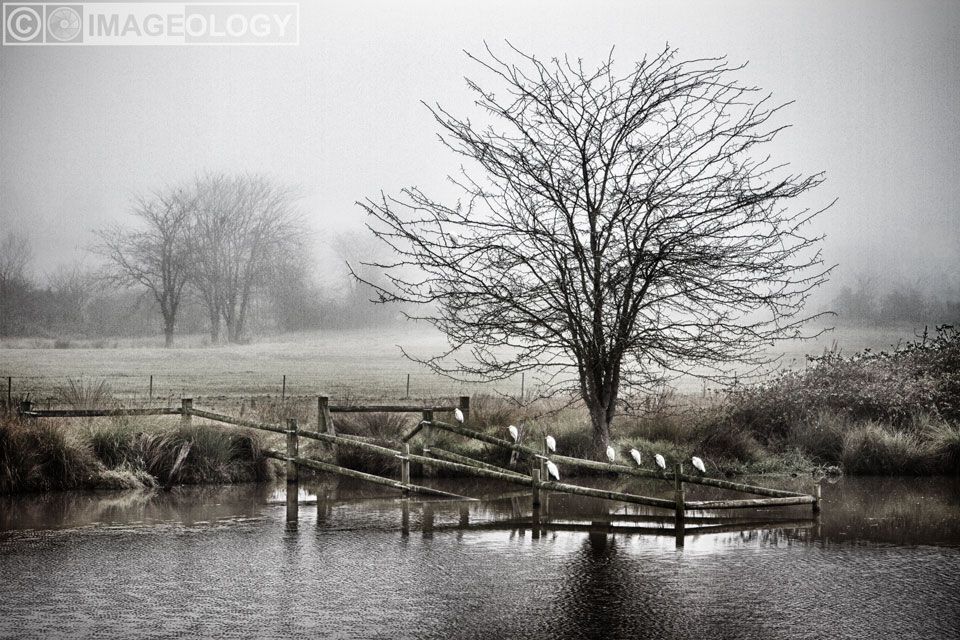 I love photographing on cold winter days and particularly on cold foggy mornings. Fog adds an extra dimension to any landscape and like all weather, it’s variability adds an extra layer of challange for the photographer. You can study the weather forecasts all you like but it is not until you rise before sunrise on a chilly morning and stick your head out the window to see if there is any fog around to be sure if there is a chance of capturing a great misty shot.

On this particular morning there was an extensive layer of fog and so I grabbed my gear and headed out to some of my favourite sites to see what area was the best. Places that I had got some great shots previously weren’t working for me that day so I continued to travel around to find a better image. Finally, as the morning had progressed and the fog had started to lift a little I came across this dam and set up my camera on the tripod. The stark baron tree and the fence posts disappearing into the water appealed to my eye. I started capturing images using HDR (High Dynamic Range) bracketing which involves taking a series of images at different exposures so that they can be blended in software later (I’ll explain more about this in a later blog).

After about three quarters of an hour I thought that I had a good as shot as the day was going to provide me, however I kept thinking that there was something missing in the photo. There were a variety of water birds on the pond further around the corner but I figured they didn’t want to come anywhere near me. I was about to give up for the day when suddenly this group of cattle egrets flew up the pond and landed on the railings. They flicked out their wings and then settled and I took one bracket of shots and then as quickly as they came they took off agin. I hoped that I got the shot right because I didn’t get a second chance. After about four hours of shooting I didn’t think I had a winning shot apart from this possibility. I think that the egrets just make the image. What do you think?

Our key goal is to provide high quality images that will showcase you and your products and services to your existing and potential customers.

FOCUSED ON YOUR BUSINESS